We had so much fun learning one of the most complicated yet attracting games. Besides chess books, we had a great and experiences chess teacher teaching us all the rules and moves.

Time: Private class (50 min / weekly) is scheduled at convenient time.
Group time is varied depending on the month.
Call for current times.

Please, call or email to schedule a trial class
and  give us the following info: 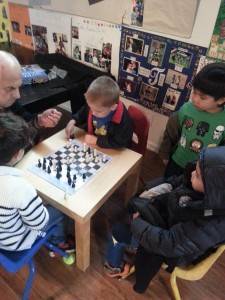 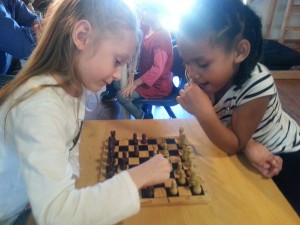 Welcome to the first ever WorldSpeak Chess Class! Today, we will be discussing the opening stage in the game of chess, which generally takes up the first 10-15 moves.

In this lesson, we will discuss the correct methods of playing the first stage, the opening.

A Few General Rules of the Opening:

This is the first rule of the opening and is an extremely important one.

Rule #1:   Develop Your Pieces as Quickly As Possible.

Speed matters. Unless you have a very good reason, you should not move your pieces more than once or twice in the opening. Don’t move too many pawns, too – the two central pawns (the d2 and e2 pawns) are enough.

Rule #2:   If your piece is already developed, don’t move it again in the opening.

Once, I played a person who was intent on moving his pieces again and again in the opening. The first few moves of our game went:

1.e4 Nf6 (both sides are doing well so far; white has prepared to develop his queen and bishop while black has developed his knight).
2.e5 (white attacks black’s knight, which now goes too deep into enemy territory. Although this doesn’t develop a piece, black’s knight has to move).
2…Ne4 (this is not a very good move, because now black’s knight can be attacked again and again).
3.d3 (white gives black’s knight no rest, and it has to keep moving).
3…Nc5 4.d4 (attacked again!)
4…Ne4 5.Bd3

Now look at the difference between white’s and black’s positions: White has developed only one piece (pawns don’t count!), but he has allowed the rest of his pieces to develop. By attacking black’s knight again and again, white gained time and will now quickly develop the rest of his army. Plus, black’s knight is deep in enemy territory and is trapped. I went on to win.

Our next rule of the opening demands some explanation. The rule states that it matters where we develop our pieces. Let’s think of an analogy to a war: If you have to fight a battle in America, would you be sending your troops to Antarctica, which is on the other side of the earth? Of course not. And the same applies to chess.

Let’s take a look at three different positions, all featuring a white knight. In which of these three positions do you think the white knight is best placed?

Let’s take a look at how many squares each knight controls.

Question: How many squares does the knight attack in the first position?
Answer: It attacks 2 squares: c2 and b3.

Question: How many squares does the knight attack in the second position?
Answer: It attacks 4 squares: b2, c3, c5, and b6.

Rule #3: The best positions for the pieces are usually in the four central squares and the surrounding areas.

Rule #4: Generally, you should try to develop your pieces in order of weakest piece to strongest piece.

Let’s quickly review how much each piece is worth:

Start by developing your two central pawns – the d- and e- pawns. Then the knights and bishops. Castle your king (which is a very important step, as the king is not safe in the center of the action), bring your rooks to the center, and finally, move your queen into position.

Sounds like a strategy! Let’s take a look at a possible opening for white (of course, one should take into account what black does – it is doubtful that this setup will always be possible):

We then reach the following position (see the next page):

Note how every single white piece is mobilized and is controlling the center. All the requirements of the opening have been completed.

Notice that none of white’s pieces has gone far into enemy territory. White completed the opening first before starting the battle. A brilliant setup for white, and an opening well played.

Exercise: We will play a small game. Take turns making a move against the instructor until the opening stage is complete.

Let’s Review the rules of the opening:

And don’t forget the most important chess rule of all: Have Fun!